Miami, Florida – More than 40% of entrepreneurs in 35 of 50 countries agree or strongly agree that their motivations to launch a business are to make a difference in the world, according to the Global Entrepreneurship Monitor’s (GEM) latest Global Report.

Many companies have put a priority on pursuing purpose in recent years. This finding indicates that so too are entrepreneurs. There were stark differences across countries: India, South Africa and Guatemala had the highest percentage of entrepreneurs whose motivations are to make a difference in the world.

Fifty economies participated in the GEM 2019 Adult Population Survey (APS) and more than 150,000 individuals took part in extended interviews as part of the research.

The GEM results confirmed that accumulating financial wealth is also an important motivating factor. More than eight out of ten of those starting a new business in Iran, Qatar, Pakistan, India and Italy indicated that building great wealth or income has motivated them. This compares to less than two in ten in Norway or Poland.

“The desire to get rich and create wealth will clearly not go away, nor should it. These findings do demonstrate that individual wealth creation is by no means the only driver for entrepreneurs. The new generation of entrepreneurs increasingly tend to be aspirational in other ways,” said Niels Bosma, Professor at Utrecht University School of Economics and Chair of the GEM’s Board of Directors.

“This is important evidence of the potential and current contribution of entrepreneurship to several of the UN Sustainable Development Goals,” said Aileen Ionescu-Somers, GEM Executive Director. “It is also encouraging to see the substantive evidence of ‘purpose-driven’ entrepreneurship taking hold at the grassroots level, demonstrating the collective will for future business sustainability. We will continue to research new questions that provide policymakers and other actors in the entrepreneurial ecosystem with credible data to make informed decisions.”

Within the 50 economies participating in the 2019 GEM Global Report, the six highest levels of TEA are all in the Latin America and Caribbean region. TEA varies from 5% of adults or less in Italy, Pakistan, Poland and Japan to well over 35% in Chile and Ecuador.

A good indicator of sustained health of entrepreneurship in an economy is the level of Established Business Ownership (EBO). Less than 2% of adults are running mature businesses in Puerto Rico, Egypt, Mexico and Oman, compared to 20% in Madagascar, 16% in Brazil, 15% in Guatemala and Ecuador and 14% in Greece.

Switzerland tops for ease of starting and developing a business

Last year GEM introduced the National Entrepreneurship Context Index (NECI), a measure of the ease of starting and developing a business. In the latest report, Switzerland topped these rankings among the 54 countries involved in the study, followed closely by the Netherlands, Qatar, China and the United Arab Emirates.

Data from NECI was derived from the 2019 GEM National Expert Survey (NES) in which national experts are asked to assess the national environment for entrepreneurship in terms of 12 GEM-defined framework conditions.

U.S. entrepreneurship levels on an upward trend over 19 years

The average level of both entrepreneurial activity and established business ownership in the United States has trended upwards for the past 19 years, according to the report. In addition, entrepreneurial attitudes flourish in the U.S. with 7 out of 10 adults agreeing that that they are thought by others to be highly innovative.

In 36 of the 50 economies, more than half of the population believes that they have the skills, knowledge and experience to start their own business. In the United States, 65.5% of adults reported these capabilities perceptions, the highest level on this indicator since GEM started in 1999.

“The positive attitudes about entrepreneurship that we see in the United States, and in many other parts of world, are an encouraging sign. It indicates that there is both a supply of potential entrepreneurs and those who may support their efforts. This is all reflective of the visibility, events and leadership that contribute role models and inspiration for entrepreneurs,” said Donna Kelley, PhD, Frederic C. Hamilton Professor of Free Enterprise Studies at Babson College.

Employee entrepreneurship taking hold in certain countries, but not yet globally

Firms are increasingly valuing entrepreneurship skills amongst employees. In the United Arab Emirates, United Kingdom and Australia, more than 8% of employed adults are involved in entrepreneurial activities, such as developing new goods or services, as part of their employment, compared to less than 1% in 16 of the 50 economies.

“We can infer that employee entrepreneurship has not yet taken hold across the world,” said Bosma. “Given the changes in organizational and even national culture implied by an employee entrepreneurship imperative, such a transition in the work world may be particularly difficult for some economies, albeit necessary. Institutions need to develop in a stable environment so that attractive, entrepreneurial jobs are actually available.”

Access the Global Report and watch a video presentation highlighting the key findings.

In numbers, GEM is:

GEM began in 1999 as a joint project between Babson College (USA) and London Business School (UK). The consortium has become the richest resource of information on entrepreneurship, publishing a range of global, national and 'special topic' reports on an annual basis. 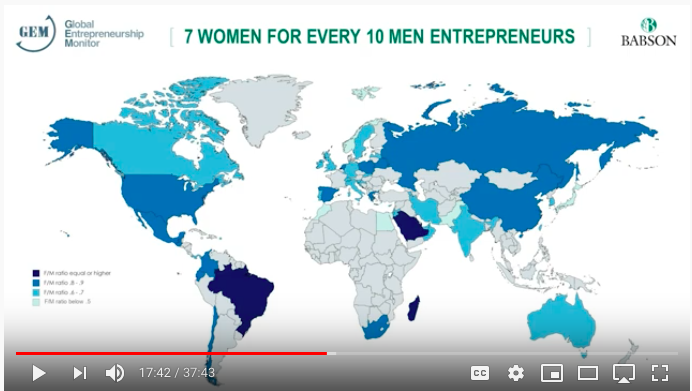