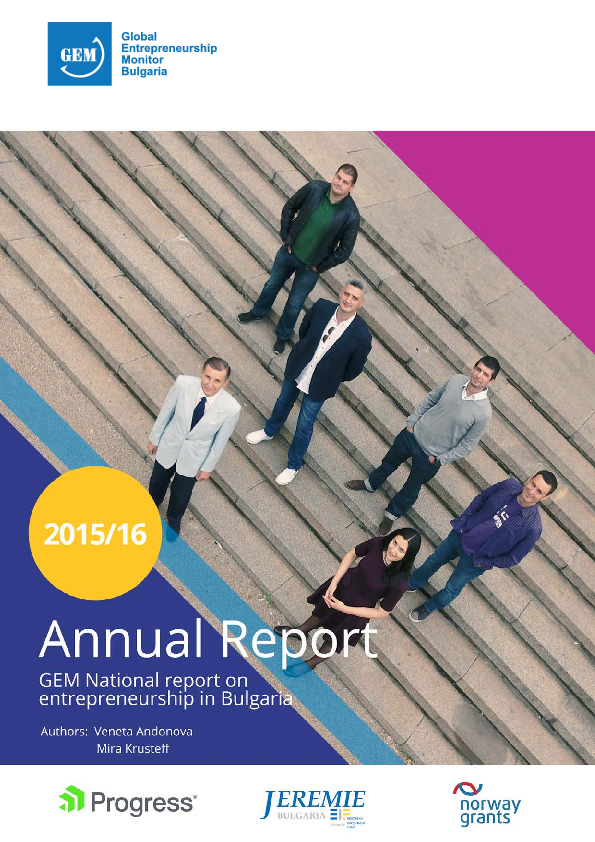 Three out of four Bulgarians believe that successful entrepreneurs are important for the society The typical Bulgarian entrepreneur is aged between 35 and 44 years and is particularly wary of recruitment, according to the first annual report of the organization 57.5% of the adult population in Bulgaria see entrepreneurship as a good career choice, while 71.5% agree that successful entrepreneurs enjoy high status. This shows the first national report oof the Global Entrepreneurship Monitor (GEM) Bulgaria, officially presented on 3 October in Sofia. The report includes an analysis of 2,000 interviews with adult citizens across the country by measuring individual activity at the different stages of the entrepreneurial process and detailed information on the levels of each stage, including the phase "intention". Its purpose is to provide policymakers, educators and business leaders information to help them implement specific, practical and targeted recommendations. "In 2015, 15.8 percent of the adult population of Bulgaria stated that there are good opportunities for starting a business in the area in which they live. This result is significantly smaller than the corresponding figures for Romania and Greece, "said Veneta Andonova, author of the report and professor at the Universidad de Los Andes in Colombia. The level of total early-stage entrepreneurial activity (TEA) in Bulgaria was 3.46%, including 1.95% of the adult population engaged in emerging entrepreneurial ventures - in the registration period and another 1.51% - new owners business - over the last 42 months. Regardless of the very low levels of this indicator in the country, a relatively large percentage of these entrepreneurial initiatives survive long enough to become established businesses. "Half of the respondents in our survey believe that entrepreneurship generates regular media interest, which is probably also a good incentive for business development," says CEO of GEM Bulgaria Mira Krusteff. Along with the report, during the Annual GEM Bulgaria conference, the profile of the typical entrepreneur in the country was presented. The most active entrepreneurial age group in Bulgaria turns out to be the 35-44-year-olds, while the group 18-24 accounts for approximately the same levels of entrepreneurial activity. "The level of entrepreneurial activity in early stage among men and women is almost equal, but to feed the Bulgarian economic growth is important to identify those 7% active entrepreneurs in the early phase, which plan on high growth for their business" explained Krusteff. According to data, budding entrepreneurs in Bulgaria are extremely wary of future recruitment, with nearly three-quarters of them not expecting to hire staff, while 20.3% expect to create between 1 and 5 jobs in the next five years. Bulgaria has a small but energetic group of innovation-oriented businesses that utilize innovation remarkably effectively. In fact, this model of "elitist" innovation suggests that there may be a two-tier distribution of the Bulgarian early- stage companies: a small group of innovation-active businesses and another, much larger group of businesses that do not deal with innovation. The real challenge for public policy is then spread innovation culture among the second group to broaden the base of which depends on the international competitiveness of the Bulgarian economy. The most critical constraints to entrepreneurship in the country are the lack of effective entrepreneurship education in primary and secondary schools, government support and initiatives aimed at making entrepreneurship a national priority, according to experts in the national panel of GEM Bulgaria for 2015. According to them, access to finance is also a common obstacle, as it is directly related to the low financial literacy of the early entrepreneurs. The authors indicate, however, that the promotion of entrepreneurship among the age group 18-24 can be extremely effective, especially if their entrepreneurial ventures are compatible with their academic commitments. The first GEM Bulgaria 2015-16 Annual report was published in October 2016 in Bulgarian and English language. The report also featured 6 case studies of Bulgarian successful entrepreneurs. Sponsors of the first annual GEM Bulgaria report 2015-2016 are Progress, JEREMIE Bulgaria, and Innovation Norway/Norway Grants.